Taiwan is full of delicious things to eat.

And while you can choose from a variety of Taiwanese favorites like xiao long bao and stinky tofu, there’s one dish that might top the list of most beloved and most sought after Taiwanese foods:

When I was in Taipei, I went to  a restaurant called Lin Dong Fang (林東芳牛肉麵), one of the most well known and well respected names in Taiwanese beef noodles in Taipei.

Not too far away from Homeyhouse hotel where my wife and I stayed* during out visit to Taipei, one day for lunch it was finally time to walk over to Lin Dong Fang and devour our first bowl of Taiwanese beef noodle soup.

There are a lot of beef noodle restaurants in Taipei, some other famous spots include Yong Kang and Tao-Yuan-Street.

But after doing quite some research and reading up on Taiwanese beef noodles, I felt Lin Dong Fang would cater to my style of street food love, and it wasn’t too far from where we were staying.

I knew the restaurant was going to be packed out for lunch, and so we arrived quite early, right around 11 am so as to beat the lunch rush – which we luckily did.

Throughout my noodle eating career throughout Asia, I’ve come to the conclusion that often the scarier the boiling pot of animal parts at the front of the restaurant, the better tasting bowl of noodles.

Just look at at that.

A giant metal pan full of white chunks of fat and tendon, not only boiling in a dark colored broth, but it was boiling in a way that the chunks were actually jiggling.

It was scary and beautiful.

(To get the extent of the boiling, be sure to watch the video below)

Lin Dong Fang was exactly the type of restaurant I love so much. It was kind of a permanent street food stall, housed in an old-school building and pretty makeshift.

The main kitchen, where the beef was brewing and the bowls of noodles were being assembled, was on the left hand side.

Then there was a small main eating room to the right, and there were another couple small eating rooms down the sidewalk that looked like they were right in a hole-in-the-wall.

We got a seat in one of the hole-in-the-wall spots, which included a little blue painted room with a bar eating counter surrounding the walls.

I didn’t notice an English menu at Lin Dong Fang, but there were a few boards up on the wall within the restaurant written in Chinese.

Basically the main decision you need to make is if you want the big or small size of beef noodles. I chose the big size, served in a metal bowl. But the small size was pretty big as well.

The next thing you need to decide is if you want both red meat and tendon, or one or the other. The typical thing to do is get half meat and half tendon.

Next, along with Taiwanese beef noodles, they also had some side salad types of dishes. The salads were stacked up on a table in the dining room next to the kitchen, and you could grab your own or ask for them.

To supplement my bowl of beef noodles I had a bowl of green vegetables and a bowl of wheat gluten, one of their specialities.

The vegetables, which I think were mustard greens, were either boiled or stir fried with a hint of sesame oil.

They were good, nothing special, but good to have some vegetables to change up the starchy noodles and beef.

The entire time I was eating this, I thought it was tofu. But after reading this other excellent blog post about this restaurant, I learned it was wheat gluten.

It tasted, both in texture and flavor, almost identical to tofu.

I honestly wasn’t expecting the wheat gluten to be so flavorful (it looks pretty standard and plain), but I was surprised how good it was. It was really juicy, like a sponge that had soaked up a bunch of salty flavored broth.

The wheat gluten made a good and refreshing accompaniment to the beef noodles.

Enough of the side dishes, the real reason to come to Lin Dong Fang is for their beef noodles, and like I mentioned above, I went for the large sized bowl.

I also ordered my noodles with half meat and half tendon.

The noodles were flash blanched, then added to the bottom of the bowl, followed by the chunks of tender tendon and the slices of beef, plus a handful of green onions, and finally a dousing of the eternal brewing beef broth.

Before adding any condiments to my soup, I tried the meat and broth plain.

The soup broth had an incredibly smooth flavor, not too beefy and not too gamey tasting, but just a really clean meat flavor, and a slight aroma of Chinese herbs.

I’m not sure of which Chinese herbs were added to the soup, but they claim it’s one of their secret ingredients.

The soup broth was honestly good enough to be eaten with no additions or any extra condiments at all.

But I’m a little crazy when it comes to condiments; If there are condiments on the table I will use them. And I can never hold back from chili.

Noticeably sitting on every table was a chili paste condiment filled into a plastic cup. I thought it looked a bit like peanut butter.

There was also a container of red chili sauce as well.

Adding a couple scoops of the chili paste to the broth of my beef noodles enhanced it even more. It gave it just a bit of heat, and a smokey dry chili kind of flavor, which was fantastic.

The red chili sauce was a little on the salty side, so I did use it to dip pieces of tendon into, but it was a little salty to eat too much of.

Let’s talk about the beef

Just looking at the slices of beef, it doesn’t really look all that tender, right?

I wasn’t really expecting the beef to be extremely tender. I was wrong.

For my first bite of beef I decided to one-bite an entire piece, which was actually cut quite thick and was a pretty significant bite.

I could hardly believe how tender it was. Literally fall-apart tender, and bursting with flavor. It wasn’t mushy at all, but almost flaky like firm fish.

The tendon, which is not typically my favorite cut of meat, was still good, though I preferred the meat.

The tendon could have been boiling and brewing for days, as it was incredibly soft and tender as well. The texture was of course a bit on the wiggly side as tendon is. But along with being wiggly, it was almost creamy.

We’ve covered the broth and the beef, and the final component of any bowl of Taiwanese beef noodles is of course the noodles.

First of all, they weren’t too starchy, but quite smooth and hearty. But the real bonus about the noodles at Lin Dong Fang was that they weren’t overcooked but instead were nice and chewy.

Since I take a lot of food photos everywhere I eat, I’m quite used to eating soggy, soup saturated noodles.

But after taking probably at least 5 – 10 minutes worth of photos, the noodles sitting in the broth still remained chewy and not stuck together.

I don’t know what they do to their noodles, but they are somehow unexplainably good.

Watch the full video of this meal here:

(If you can’t see the video, watch it on YouTube here)

One of the must-eat dishes in Taiwan is Taiwanese beef noodle soup.

To get a taste of this iconic Taiwanese favorite, I went to Lin Dong Fang, a long-time hero in the Taipei beef noodle serving industry.

With its medicinal aromatic broth, tender chunks of both beef meat and tendon, and slightly chewy not overcooked noodles, Lin Dong Fang truly excels in serving awesome beef noodles. The atmosphere of the restaurant is fantastic as well.

Since I was trying to eat as much of a variety of Taiwanese food as I could during my visit to Taipei, I didn’t get to eat too many different bowls of beef noodles, but I can say this is so far the best bowl of beef noodles in Taiwan that I’ve had.

If you love beef noodles, you’ll love this place!

Also, be sure to check out my Taipei Travel Guide for Food Lovers!

Address: No. 274 Bade Road, Section 2, Zhongshan District, Taipei, Taiwan
Open hours: Monday – Saturday from 11:00am – 6:00 am
Prices: The big sized bowl of beef noodles is 240 TWD ($7.30) – not a bad price for everything included in the bowl, the normal bowl I believe is 170 TWD ($5.17)
How to get there: The restaurant is located on Bade road, about halfway in-between Nanjing Fuxing and Zhongxiao Fuxing Station. I think it would be about a 5 – 10 minute walk from either of these stations.

Are you ready for some beef noodles!? 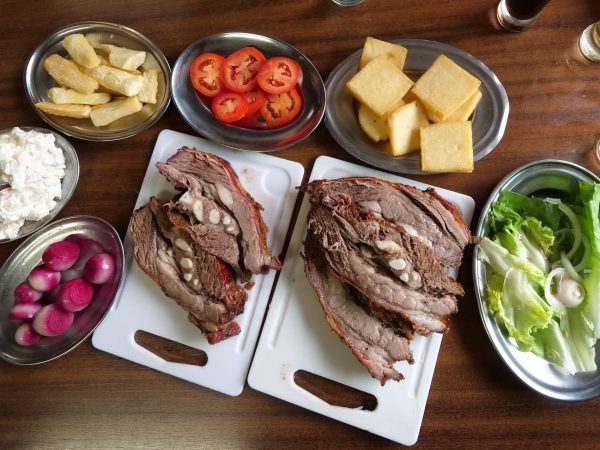 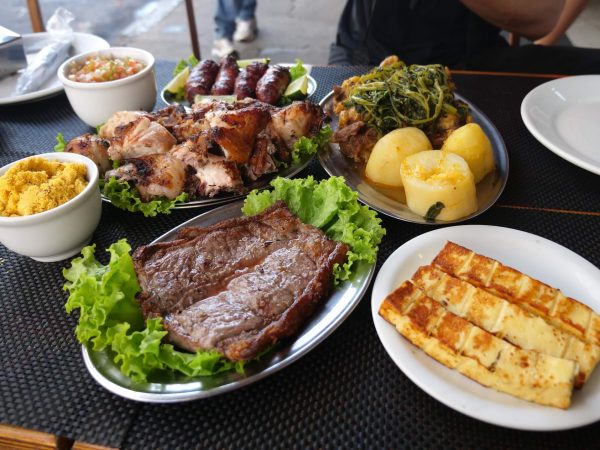