Shinsaibashi and Dontonbori, both of which are next to each other and connected by walking streets, are two of the biggest shopping areas in Osaka.

And when it comes to food, there are so many restaurant options that it’s actually a bit confusing to choose what to eat and where to go.

Luckily when I was in Osaka, I had internet on my phone, and while my wife Ying was busy browsing all the shops, I did some research for restaurants in the area on Foursquare.

That’s how I found Ikkaku (一鶴 心斎橋店), a place right off the main shopping street of Shinsaibashi serving chicken.

Despite having all the info at the tip of my palm on my phone, finding the restaurant was not all that easy.

I followed the pin on the map, and came to the corner of the road, and there was a building, but no restaurants.

So after wandering around lost for a while I finally looked at the signs for places within the building on the corner, and recognized the sign for Ikkaku (一鶴 心斎橋店), the restaurant I wanted to eat at.

We had to take the elevator up a couple floors to the restaurant on the 3rd floor (if I remember correctly).

The elevator ushered us to the floor, and we stepped out to find a crowd of others, all waiting for their chance to get into the restaurant.

I walked over and asked how long the wait was, and he said it would take about 45 minutes.

So even though I was pretty hungry, we decided to wait it out and put our name on the waiting list.

Although the menu at Ikkaku (一鶴 心斎橋店) was all in Japanese, luckily it was a pretty easy menu to read and follow.

There were pictures of all the dishes, and the restaurant really only had a couple of different choices of what to get, making it nice and simple and straight forward.

The most important thing that Ikkaku (一鶴 心斎橋店) specializes in is chicken, and they had two choices: old chicken and young chicken (poussin if you prefer), which our waitress called the mother and child chicken.

If you eat here, you really have no choice but to get both, and that’s what we did.

Before the chicken arrived, our waitress offered us bibs, and that’s when I knew things were going to get good.

I accepted the bib offer, and couldn’t’ wait to start digging in.

Since there were three of us including myself, we decided to ask the waitress to cut the chicken into bite sized pieces to make it easier to share (since the chicken was served bone on, a drumstick and thigh).

The chicken came, and I could immediately tell the difference in the color of the two different types of chicken.

The old chicken was much darker in color, and it even looked a little more muscular and tougher, while the young chicken was oozing with juice and had a much lighter whiter color to it.

Both of the chickens were prepared in the same way, and I’m not exactly sure how they prepared it, but whatever they did it was unbelievable.

The skin was incredibly crispy, with a beautiful saltiness to it, and a nearly unimaginably delicious and well pronounced chicken flavor.

The old chicken was indeed very chewy, chewy almost like chicken jerky. But with every chewy bite, the chicken just kept releasing more and more juices and oil. It’s like the flavor never stopped being released from each bite of chicken.

Since it was so tough and chewy, it was more like a bite sized little snack that would go well with drinks, as opposed to a full dinner. However, that flavor was impressive.

I was even perhaps more excited to get started tasting the young chicken at Ikkaku (一鶴 心斎橋店).

Honesty speaking, cut up like it was, if it wasn’t for the noticeable chicken bones, I could have mistaken it for slices of pork belly – that’s how golden crispy the skin was and how many layers of the chicken there were in each piece.

The young chicken was tender, and literally dripping in juice and oil, with that crunch of the skin to break the softness of the chicken.

It was quite salty, making each bite even more and more addictive.

By this time during our chicken meal in Osaka, I saw many other tables, and it seemed like most others had their own chicken leg, without it being cut into pieces, and they were gnawing on the entire leg happily.

On top of that, our waitress mentioned to me that the best way to eat the chicken was whole like that because all the juices were kept inside of the chicken without slicing it. 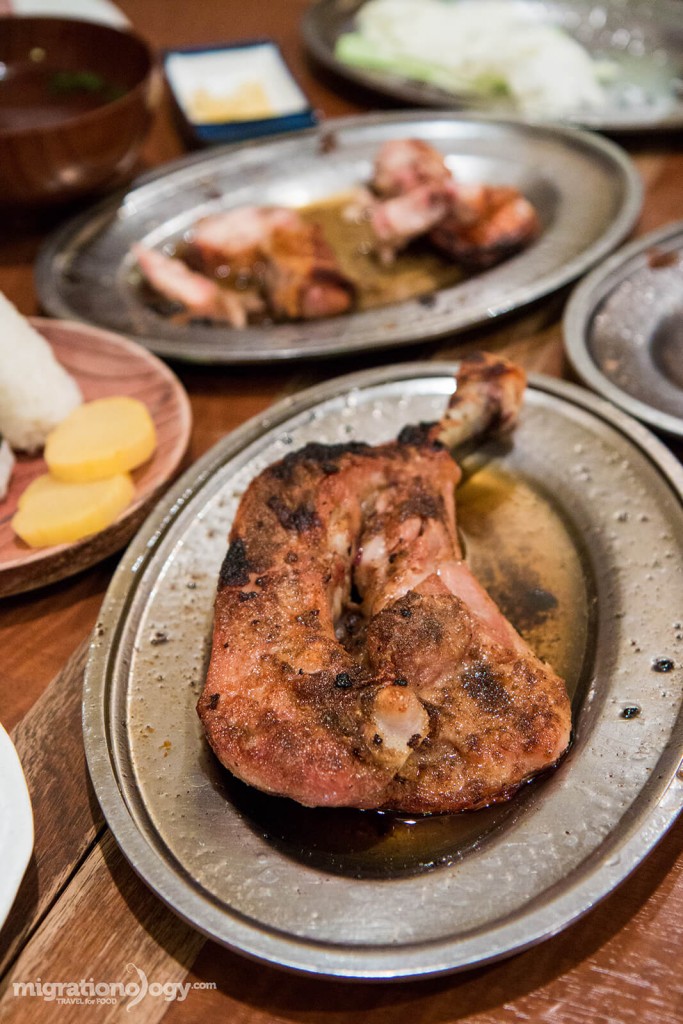 So I had to order one more… 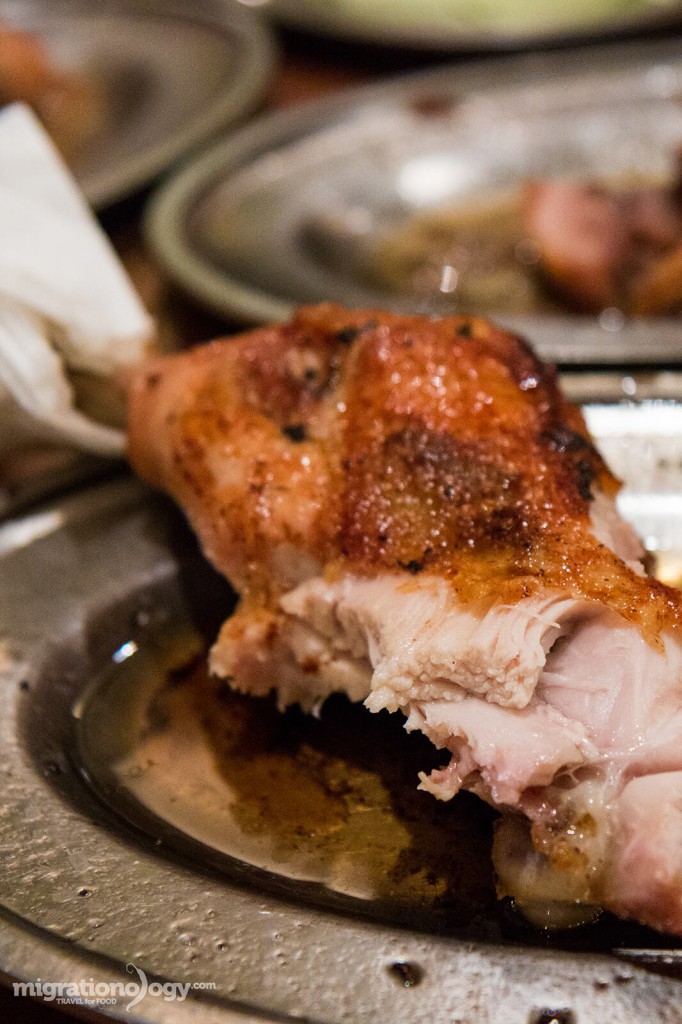 It was even juicier!

I had to order another young chicken leg, this time without slicing it up.

Like what everyone else was doing, in true Japanese fashion, I wrapped a napkin around the end of the chicken drumstick bone, and used that to pick it up and start biting.

Just as our waitress had mentioned, it was even juicier.

I’m not joking when I tell you that I took my first bite out of the thigh of the young chicken, and literally beads of juice began to rise to the surface of where I took my bite.

In addition to the chicken, I also noticed the onigiri (here’s an excellent looking recipe) on the menu, and they appeared to be the perfect thing to accompany the salty juicy chicken.

Again, our friendly waitress came to the rescue and suggested I dip my rice ball into the oily juice at the bottom of my plate of chicken before eating.

It was predictably, insanely delicious.

Lastly on the picture menu, there was some kind of a rice bowl topped with thin strands of omelet, which we couldn’t resist ordering to complete our meal at Ikkaku (一鶴 心斎橋店).

Again, they made no mistakes.

The rice was really fragrant, perhaps stir fried or steamed with the chicken oil or broth, then paired with the dry thin slices of omelet, and a spoonful of pickled Japanese ginger on the side.

I think it was that chicken fragrance in the rice that made it so good.

So, old or young chicken?

Both were good, but I would definitely go back for the young chicken.

The old chicken was so tough and chewy, that despite it giving off incredible flavor, it was more of a snacky food and might make your jaw tired.

The young chicken was just butter tender, and bursting with more flavor and juices than I thought possible in a piece of chicken.

Ikkaku (一鶴 心斎橋店) is a restaurant in the Shinsaibashi area of Osaka that specializes in old and young chicken.

After doing some shopping, I was really looking forward to eating chicken, and after locating the restaurant, we ordered.

The chicken was unimaginably juicy and flavorful, and with a rice ball on the side (dipped into the chicken oil), it was even better.

Ikkaku (一鶴 心斎橋店) is yet another addition to the glorious food in Osaka, and they serve some seriously marvelous chicken. 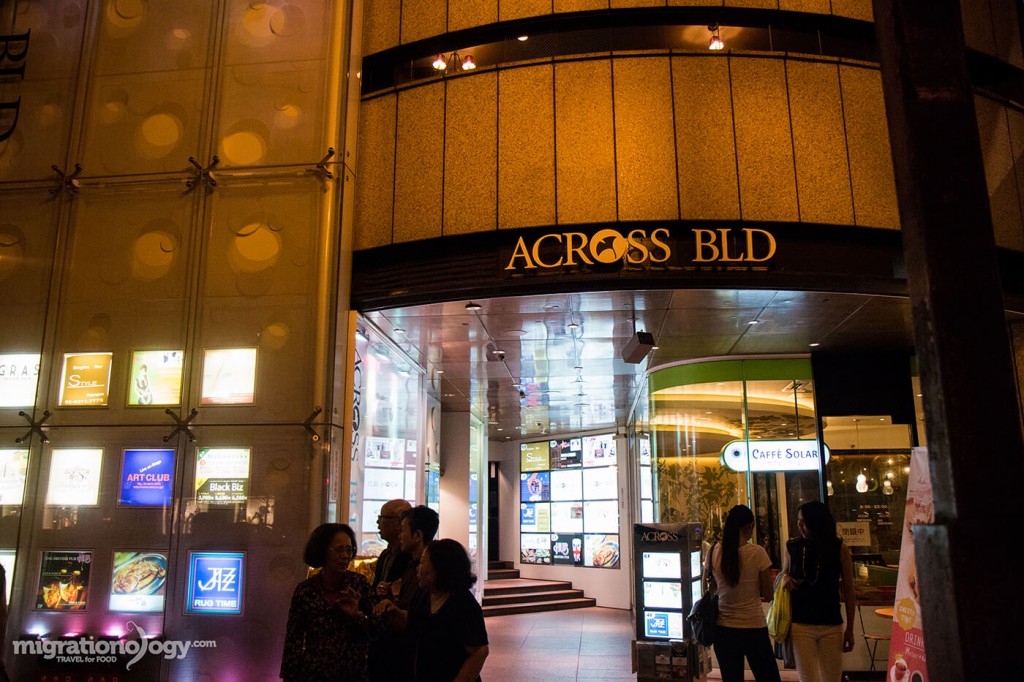 This is the outside building

Address: I’m not exactly sure, but it’s right on the corner of the main road Mido-suji and a side lane with no name in Shinsaibashi. I’ve plotted it on my Osaka food map here.
Open hours: About 5 pm – 10 pm daily, maybe open longer on the weekends
Price: 1,008 JPY for the old chicken, 894 JPY for the young chicken. Our total bill for 3 came to 3,300 JPY

Are you ready for some juicy chicken?