But leave it up to Japan to make everything better quality, including chicken nuggets, or rather gourmet deep fried skewers of ingredients better known as kushikatsu.

Right up there with takoyaki and okonomiyaki, kushikatsu is yet another homegrown must-eat Osaka food, and during our trip we headed to an area of town called Shinsekai one morning to eat at Kushikatsu Daruma.

Here’s what I thought of these gourmet chicken nuggets…

Deep fried things on skewers didn’t really sound good to me at all.

Yes, deep fried things can taste good (and I do often love them), but on whole I often think deep frying is a way that bad ingredients are covered up and made crunchy to taste better.

But if there’s one thing I’ve learned about Japanese food, it’s that seemingly simple foods and combinations, are elevated to new levels.

Shinsekai is an area in Osaka, south of the Namba area, that’s not only home to an abundance of gaming and entertainment, but it’s quite well known for being one of Osaka’s epicenters of kushikatsu.

This is not saying that kushikatsu is not available all over Osaka, but there’s a high concentration in Shinsekai.

Probably the most well known restaurant, the pioneer of kushikatsu is a restaurant, now a major chain, called Kushikatsu Daruma.

We didn’t go to their original location, but we went to their branch about a 5 minute walk from the original branch.

The restaurant typically has a long line waiting to get in, at every branch I passed throughout Osaka. Luckily, when we went at about 11 am, they didn’t have a line, which is one of the reasons we stopped in and grabbed our chance.

On the menu at Kushikatsu Daruma you’ll find a variety of all the skewers of deep fried nuggets they offer, plus a few other side dishes, and a list of beverages to accompany your crunchy snacks.

You can either order all your sticks of kushikatsu a-la carte if you know what you want to order, or they have a number of different sets you can get, which are a variety of different things.

I was eating with my wife and her sister, and since I honestly had no idea what would be good or not in chicken nugget form, we went for the 16 stick combination for 2,000 JPY (not on the picture of the menu).

When eating kushikatsu there are a couple of rules.

The main rule, no double dipping. Along with the deep fried skewers, sauce is one of the most important parts of eating kushikatsu, and there’s a communal dish of sauce that sits in the middle of all tables, and I guess it’s shared from one table to the next.

Despite our kind waitress explaining what just about every skewer was, I honestly can’t remember everything that was included.

However, I do know we had some chicken, beef, quail eggs, shrimp, hot dog, and a variety of tuberous vegetables in the mix.

Cooked right in the middle of the restaurant in the center kitchen area, the skewers arrived hot and fresh, with just a light and thin coat of panko breadcrumbs on top, and as always in Japan, they were fried to perfection, not overcooked, and golden brown. 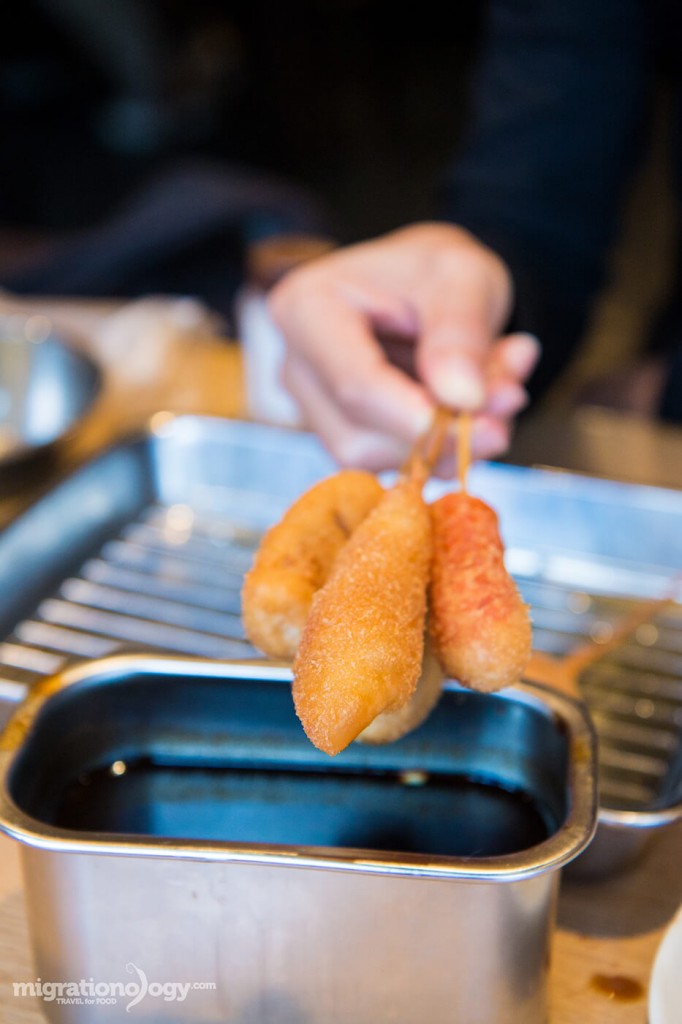 A handful of kushikatsu 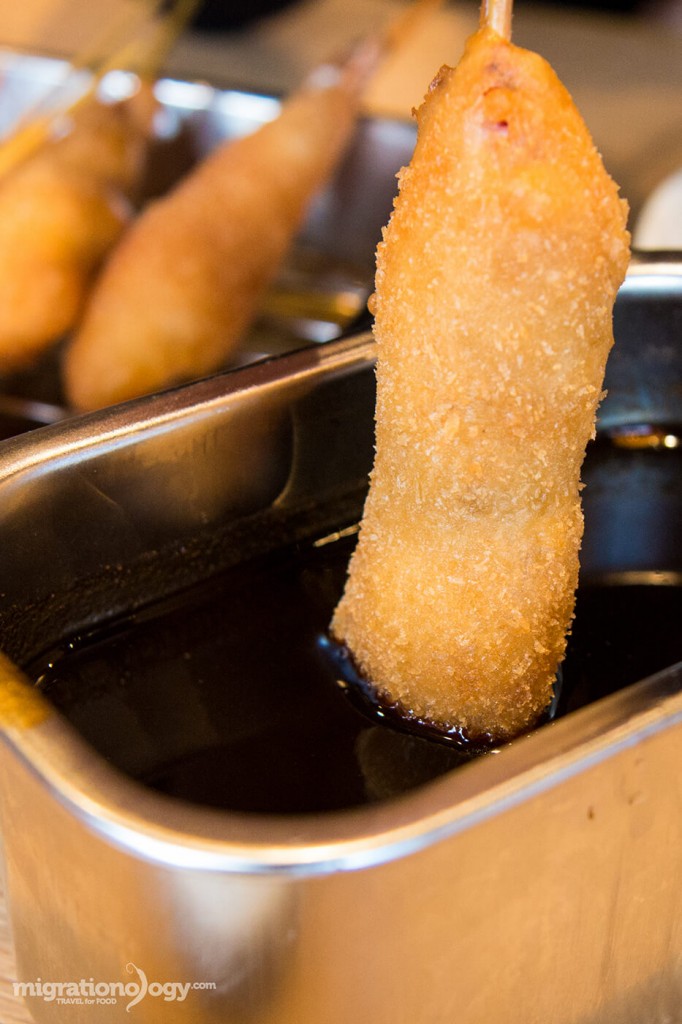 I think this was the beef

I started off with a random skewer, which turned out to be a quail egg on the inside.

To my surprise, it was pretty good, and I think it was so good for two reasons. One, because it was deep fried fresh and hot and with not too much batter, and two because of the sauce.

At first I was hesitant to add too much sauce, so I just dipped a small piece of my deep fried nugget.

But after tasting the sauce, which had that beautiful Worcestershire soy sauce sour, salty, and sweet taste, I knew for every other skewer I’d need to submerge, rather than just dip.

I think the sauce included some of the citrusy ponzu soy sauce, but it tasted very similar to Worcestershire.

The skewer of kushikatsu that had me the most puzzled was this one, a V shape, with something green in the middle.

And ever after taking a bite, I still was confused. So I checked back on our menu, and finally realized it was asparagus.

But unlike tempura, kushikatsu is more of a snacking street food style of food, much less delicate and not as refined in quality as tempura.

Kushikatsu is the type of Osaka snack food that you go to eat and socialize, drink beer, and enjoy some tasty junk food style deep fried skewers.

I didn’t have a beer this time because we ate here in the late morning, but I’m quite sure kushikatsu would go fantastic with a cold beverage.

When I first heard about how famous kushikatsu was in Osaka, I wasn’t all that interested in trying it, mainly because I’m not all that into chicken nuggets… even if they’re gourmet.

But after eating this mixed platter of Japanese kushikatsu at Kushikatsu Daruma, I will admit they were pretty good, and partly what made them so good was the dipping sauce.

I think overall it was a little overpriced, expensive for what it is, but nevertheless, snacking on some kushikatsu while socializing, is yet another food experience to have in Osaka.

Kushikatsu Daruma is one of the major kushikatsu brand chains in Osaka, but you’ll find plenty of other less commercialized places to try as well.