Jerusalem is one of the world’s most fascinating cities… and it also happens to be an amazing place to eat.

In this Jerusalem food tour post, I’ll give all the details about a few of the ultimate culinary gems to get a taste of this incredible city.

I had wanted to visit Jerusalem since I was a kid, and finally I had a chance.

But along with some sightseeing, the main reason I wanted to visit Jerusalem was to eat, and see the incredibly loving people behind the food.

I met up with my friend David from The Hungry Tourist (check out David for some amazing food), and Rafram, an expert on Jerusalem, and we set off to devour the ultimate food of Jerusalem in a single day.

I’m going to share with you all the places we ate.

(Or you can watch it on YouTube here: https://www.youtube.com/watch?v=FLmNLrog6dQ)

There’s no better way to start the day off when you’re in this region of the world, than with a plate of hummus, pita, and fresh raw vegetables.

Of every hummus I’ve ever had, this little family restaurant located on the outside of Damascus Gate of Old Jerusalem, is probably the best I’ve ever tasted.

Hummus is relatively simple ingredient dish – chickpeas, tahini, olive oil, salt –  but what’s amazing, is that no two plates of hummus are the same. Every version tastes and feels different.

The hummus in Jerusalem at Hummus Acramawi was a more fluffy version (rather than being too dense), and almost had a whipped texture to it.

Additionally, the generous amount of olive oil made it perfectly moist without being too heavy and the lemon chili sauce is what elevated it to hummus perfection for me.

Again, up until now, this is the best hummus I’ve ever had anywhere.

Just a short walk from Hummus Acramawi and you’ll find Al-shuala Grill Restaurant, known among food lovers to serve one of the best shawarma’s in Jerusalem.

As you enter the restaurant you’ll be in awe of the gigantic rotating meat, slow roasting away and waiting to be shaved into your shawarma wrap.

In addition to the meat being flavorful, the bread is a thin wrapper (similar almost to a Mexican flour tortilla or an Indian rumali roti).

Deep in the winding narrow lanes of East Jerusalem in the Old City, this piece of preserved history is a culinary gem. The owners family originally moved to Jerusalem from Baghdad.

When we arrived, the owner began making his kebabs from scratch, seasoning the minced lamb with salt, pepper, parsley and onions, and chopping and mixing it at the same time by rocking a curved sword over the ingredients (you have to watch the video to see it).

Additionally, he made one of the most memorable salads I’ve ever had – a combination of cucumber, tomato, and parsley, again, finely minced with the sword, and mixed with raw tahini.

The kebabs, and the hand-made food love the owner showed to us was why this meal in Jerusalem was probably my favorite of the entire day.

His hummus was also excellent and hand-made. It was more dense and sticky than the first version. Eating kebabs in Jerusalem is a food and people memory I’ll never forget.

One of the most legendary of all sweets shops in Old Jerusalem is Zalatimo Sweets, a generations old shop that only serves mutabak.

Mutabak is the Arabic version of a thin stuffed dough, and versions of it are common throughout the Middle East and influenced into Asia as well.

For the version at Zalatimo Sweets, the owner slaps out a piece of dough until it’s paper thin – I think it’s filo. Then he fills it up with either cheese or walnuts, wraps it up into a little packet, brushes it with olive oil and bakes it.

Out of the oven, it’s dusted with powdered sugar and served with tea or murky Turkish coffee (what I ordered).

The Jerusalem style cheese mutabak was the clear winner for me. It was perfectly crunchy and gooey, sweet, and rich from the cheese, and amazing with coffee.

Also, it’s hard to beat sitting in an ancient shop within Old Jerusalem, the history of this place will blow your mind.

Located within Mahane Yehuda Market, Azura is one of the best restaurants you’ll find for a huge local feast.

With all the food slow-cooked and presented at the front of the restaurant, just waiting to be ordered, it sort of reminded me of being back in Asia eating a Thai or Indonesia rice and curry feast.

The owner explained that much of the influence of his dishes were Turkish in origin, but his family also prepared some Mediterranean, Iraqi, and North African dishes.

Leave it up to David to order almost everything possible they had.

And the food was absolutely incredible.

The restaurant name is Azura, but it’s named that because it’s also one of their signature dishes, a slow cooked eggplant covered in a wonderfully spiced minced meat topping that was loaded with cinnamon.

The azura was among my favorite dishes of our meal at Azura – do not miss it!

Additionally, their mousakka, a layered minced meat and eggplant pie, was probably the best version I’ve ever had. I loved the tart tomato sauce it was drenched in.

Their Moroccan style oxtail stew is also insane. Ok, really, just choose whatever you see, and it’s one of those places where you can’t go wrong.

When you’re in Jerusalem, be sure to reserve some time to wander around Mahane Yehuda Market, a great open air food market. You could have an entire Jerusalem food tour right within the market – there’s so much to taste.

We sampled a few desserts including an Iraqi funnel cake, which tasted just like an Indian jalebi which I had previously eaten.

By this time on this extreme single day Jerusalem food tour I was starting to get a little full to be honest. So we set off to do a little Jerusalem sightseeing.

I won’t get into the details about the Jewish significance of the Western Wall of Old Jerusalem, you can always read more about it, but it was an amazing special site to visit in person.

While were were there, we also decided to tour the Western Wall Tunnel, an incredible underground network of tunnels built when King Herod expanded the Temple Mount.

Dome of the Rock

After emerging from the Western Wall tunnels I next wanted to visit the Dome of the Rock, the most recognizable landmark in Jerusalem, and an important Islamic shrine.

Unfortunately everyone told us it was too late to enter, so we only managed to get an impressive view from a nearby school.

In addition to the incredible Jerusalem food, and the unparalleled religious sites, just walking the ancient streets of Old Jerusalem was a highlight for me.

Walking down Via Dolorosa, a lane in Old Jerusalem believed to be the path that Jesus walked on his way to crucifixion, was something truly moving and it was a privilege to have the opportunity.

Since our dinner reservation wasn’t until a little later, we decided to head to the top of the Mount of Olives for the sunset over Jerusalem.

Again, I was speechless at the beauty and the significance of the location.

To complete this ultimate Jerusalem food tour, David got us reservations at Machneyuda Restaurant, one of the most trendy and high demand restaurants in Jerusalem.

Again, we had quite a significant amount of food, all served one by one. The mixed appetizer including everything from sashimi with tahini to rocket salad was excellent.

This stuffed burrata was also excellent, as was the truffle polenta, fillet mignon, and selection of desserts.

It was a great unwinding restaurant to complete one ultimately amazing Jerusalem food tour in a single day.

There are a lot of stories to tell in Jerusalem, but I came for the food.

And what I can tell you is that in Jerusalem you will be able to taste some incredible food, but additionally, when you start eating, you’ll connect with some extremely generous people.

This day of eating and exploring Jerusalem was one of the most memorable days of my life – the connection of food, people, history, and religion – it’s all at its strongest in Jerusalem.

Again, huge thank you to my friend David from the Hungry Tourist and Rafram, for taking me on this unforgettable day of eating. 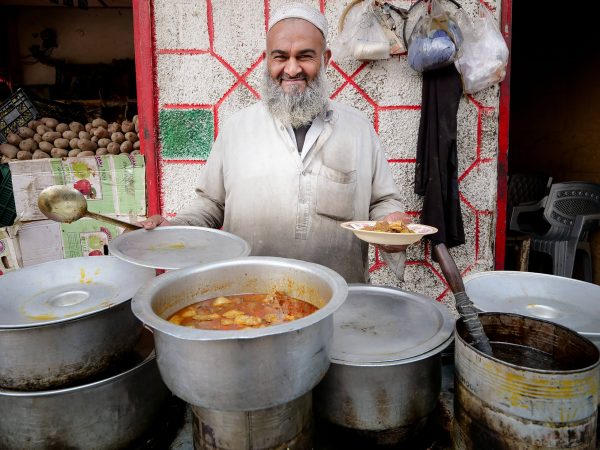