Cervejaria Ramiro is a seafood restaurant in Lisbon, Portugal, that will serve you one of the best seafood meals you’ll eat in Lisbon.

From gigantic tiger shrimp to clams in garlic sauce and goose barnacles, I’m going to share with you all the details about this unforgettable seafood paradise in Lisbon, Portugal.

I was looking forward to eating at a lot of restaurants during my trip to Lisbon, Portugal.

But nothing got me more excited than thinking about Cervejaria Ramiro Restaurant, known to serve some of Lisbon’s best seafood.

Anthony Bourdain ate here years ago on his TV show, and when I reached out on YouTube asking where to eat in Lisbon, it was the number one recommendation. On top of that, I’m also seafood obsessed.

My wife and I arrived to Cervejaria Ramiro for lunch, and luckily it just took us 5 minutes to be seated – though sometimes there’s a longer line and I’ve read stories about people having to wait outside for an hour or two before being seated (that would still be worth it).

Inside of the restaurant it’s loud with friendly conversation, and you’ll see some water tanks full of live lobsters, plus a variety of some of the finest seafood.

It feels almost like a Chinese food hall style restaurant like in Hong Kong, but in Portugal!

It’s one of those restaurants where you just start ordering, and you feel like you want to order their entire menu regardless of price, and you know it’s going to be worth it.

They have little touchpads for ordering, and you can go through the local Portuguese seafood on the electronic touchpad and designate what you like.

I didn’t really know what all to order, so I consulted with our waiter, whose name was Noonoo, and he was happy to help.

After you order, it won’t take long for some of the freshest purest seafood you’ll ever eat to come to your table.

On the table before the seafood comes, you’ll get a basket of bread on your table, which is very tempting.

Don’t eat too much bread, because you’ll want to save some stomach real-estate for the best dessert ever. Keep reading below to find out more about the incredible must-eat dessert at Cervejaria Ramiro.

Possibly if they had brought out all the seafood we ordered at once, it couldn’t have all fit on our table, so they served us a couple seafood dishes at a time, and once we ate the first ones, they brought out the others. Let’s start with the seafood.

Something I instantly ordered off the menu and that came to our table first, was a pot of clams cooked Portuguese style (amêijoas à bulhão pato – named after the Portuguese poet who loved to eat) in what I think was mostly olive oil (and or butter), and a heap of garlic and parsley.

The clams were seasoned perfectly, a little on the salty side, but filled with richness, and a garlickliness you can taste for days.

I would say that this was one of my favorite single dishes at Cervejaria Ramiro, even despite all the other more impressive seafood. That garlic flavor was just unbeatable.

Next dish that came to our table was a sizzling pan of shrimp (gambas a guilho), again in a ton of garlic with olive oil.

The garlic complemented the shrimp beautifully, and what I liked most about it was that all the garlic was half caramelized in that hot olive oil, while still tasting fresh and pungent.

You’ve probably had crab roe before… but have you ever seen so much roe that it looked like pudding in the bottom of the crab shell?

I think this was some type of stone crab, and when I saw that it wasn’t very expensive on the menu, I immediately ordered one. It was served cocktail style, so it was chilled, and they actually served a spoon inside the shell to scoop up all the crab roe pudding.

The meat of the crab was outstanding, slightly naturally sweet, and I think prepared with nothing on it. I actually dipped some of my crab bites into the garlic olive oil from the shrimp above, which went extremely well together as well.

The roe was as rich as you’d expect — with a slight bitterness, and a wonderful smoothness.

Crab done, they then brought out the shrimp, and these were no ordinary shrimp.

The tiger shrimp were among the biggest I’ve seen in my life (although it was before I saw these monstrous tiger shrimp in Hua Hin, Thailand (video). But nevertheless, they were the size of your forearm.

The tiger shrimp were grilled in little more than some olive oil and salt, very light on the seasoning if any.

The tiger shrimp meat was so incredibly firm and muscular, not as tender or sweet as freshwater shrimp, but muscular and incredibly meaty. It was sensational.

Although not as impressive and gigantic as the tiger prawns, the scarlet prawns were probably the best single piece of seafood I tried at Cervejaria Ramiro restaurant.

These gems of the sea, which are also known as carabineros, are Mediterranean red colored shrimp. Our waiter Noonoo recommended them, and I’m thoroughly glad I took his recommendation.

Similar to Thai freshwater prawns, the meat was incredibly silky smooth in texture, with an impressive natural sweetness to them. When my wife pulled off the head of the scarlet prawn, the juices and tomalley got nice and messy, just like you’d want them to.

The tomalley, was also divinely rich and creamy.

When you eat at Cervejaria Ramiro restaurant, eat whatever seafood you like, but don’t miss the scarlet prawns.

Having read about goose barnacles and seeing them on Anthony Bourdain’s show, they were something I had to try.

Our waiter Noonoo hooked us up with a samplers plate. The goose banacles sort of reminded me of goat hoofs, and they sort of have a fingernail consistency on the outside, mixed with a leathery sandpaper skin. What you do is you pop them open and eat the meat on the inside.

They are juicy and rubbery, kind of similar to really salty snails. Goose barnacles aren’t something I would crave all the time, but I did enjoy eating them, plus they look so cool!

Throughout our entire seafood meal at Cervejaria Ramiro, my wife and I were filming a video. And there was a friendly Portuguese family sitting close to us, and they were smiling and very nice.

The man asked me if I had tried the oysters yet, and I told him I hadn’t. About 10 minutes later, our waiter brought out a couple oysters… I think the friendly family ordered the oysters for me (thank you very much if you are reading this).

Anyway, the oysters were of utmost quality and superb with a squeeze of fresh lemon.

After eating tiger prawns and velvet prawns and goose barnacles, you’d think that nothing could get better. But you’d be wrong.

And yes, it’s traditional to eat it at the end of your meal, like a steak sandwich dessert.

I’m not going to share too many descriptive details about this Portuguese steak sandwich, but I can say it’s one of the greatest things to eat in Lisbon.

The bread was incredibly pillowy and crusty, the steak was tender and juicy, and all the juices and fats from the meat just melted into the bun. There was also a good amount of lightly toasted sticky garlic on the beef.

The Portuguese prego is the type of steak sandwich you’ll have dreams about.

When you taste this Portuguese steak sandwich, you’ll want nothing more for dessert.

My wife and I sat at Cervejaria Ramiro eating for 3 hours – the time just flew by. Our total bill for all the seafood we ate came to 108.42 Euros.

So while it wasn’t a cheap meal, for the quality of seafood we ate, I thought it was an incredible deal. Even coming from Thailand, I thought it was an amazing deal — you’ll pay that or more in Thailand for that quality and amount of seafood, and I know in other parts of Europe for this same meal you’d pay a fortune.

It was a special treat, and well worth the price.

If you have a few minutes, press play to watch the video above to see this entire seafood meal up and close.

Some say the seas off of Portugal are home to the best seafood in the world. So it goes without saying that you’ll eat a lot of amazing seafood when you’re in Lisbon, and there are plenty of good restaurants to choose from.

Cervejaria Ramiro is famous for both locals and tourists because they serve honest high quality, fresh, and extraordinary seafood at fair and reasonable prices, with friendly service. That’s the formula that works, and which has made them one of the best seafood restaurants in Lisbon.

The seafood was extraordinary, and the entire meal experience, made it one of the best seafood feasts I’ve ever had!

Address: Av. Almirante Reis nº1 – H, 1150-007 Lisboa, Portugal
Open hours: 12 pm – 12:30 am on Tuesday – Sunday (closed on Mondays)
Website: http://www.cervejariaramiro.pt/
Prices: Our total bill came to 108.42 Euros for everything
How to get there: Cervejaria Ramiro Restaurant is located along Av. Almirante Reis in Lisbon, Portugal. You can get there from either Intendente or Martim Moniz Metro stations. My wife and I walked from the central Rossio square area, and it only took about 15 minutes. 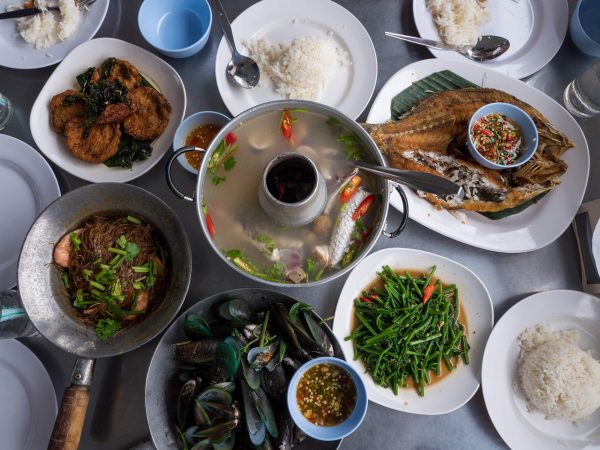 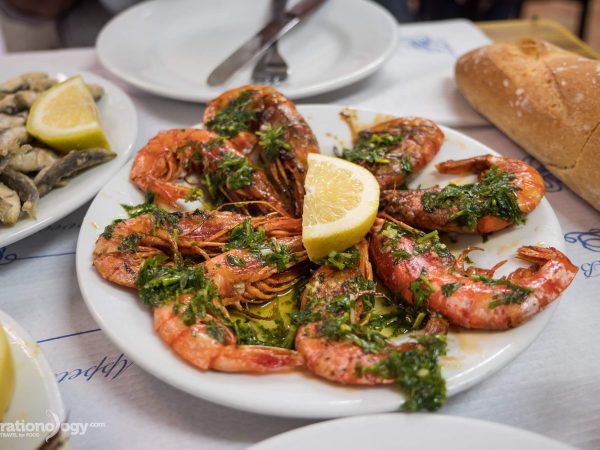 Unbelievable Grilled Shrimp and Sardines at Can Maño in Barcelona